Dylan is a two and a half year old Newfoundland who has been attending Brentknoll vets for Hydrotherapy treatment since November 2014. 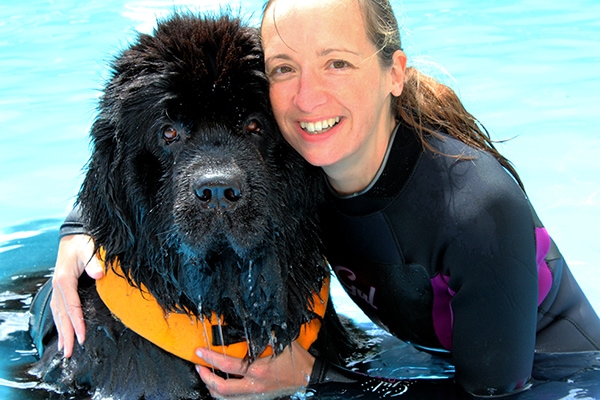 Dylan suffers with various medical conditions that affect his mobility including: Osteochondrosis dessicans, where a flap of cartilage has peeled away from the joint in both of his shoulders. Osteo-arthritis in his Left Femoral Head and A Cruciate injury to his right hind.

With regular Hydrotherpy and Manipulation at Brentknoll we aimed to increase the range of movement in his stiffening joints and to increase muscle mass, whilst hopefully limiting arthritis in the joints affected by the Cruciate injury. This reduces swelling and pain allowing Dylan a more normal life.

Dylan’s first visit with Sharon involved a 45 minute induction. Measurements of specific areas we taken to allow us to monitor any improvements/set backs as the treatment progressed. 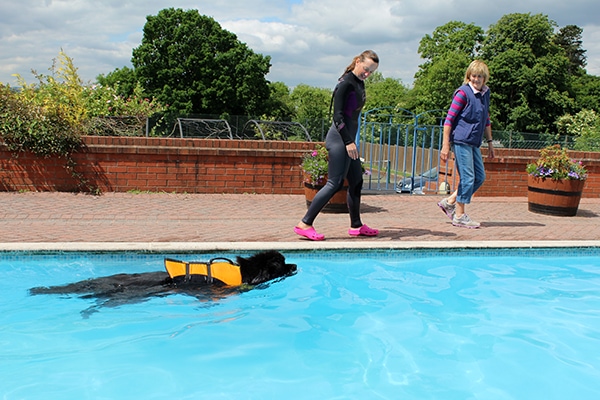 Dylan wore a buoyancy aid and got into the pool with assistance.  He was calm and relaxed and swam around the pool happy to follow his owner who walked around the pool side.  His spine appeared straight and balanced and he moved all legs freely. After five good laps Dylan tired.

Dylan attended weekly sessions in the pool and gradually increased the length of swim time from 2.5 minutes to 9, doing 3 laps of the smaller indoor pool. In June 2015 he progressed to the large outdoor pool where he began with just one lap to successfully completing 7 laps in a single session.

Dylan’s heart and lung fitness has improved so much that he now attends twice weekly swim sessions. With such positive results he continues to attend and is now one of Brentknoll’s regulars, always calm and relaxed in the water and thoroughly enjoying himself.

In January 2015 (2 mths after we started swimming) we repeated the measuring. His stifle, shoulder and elbow joints remained the same but his quadriceps (thigh) muscles had increased by 5cm on both sides which is excellent. 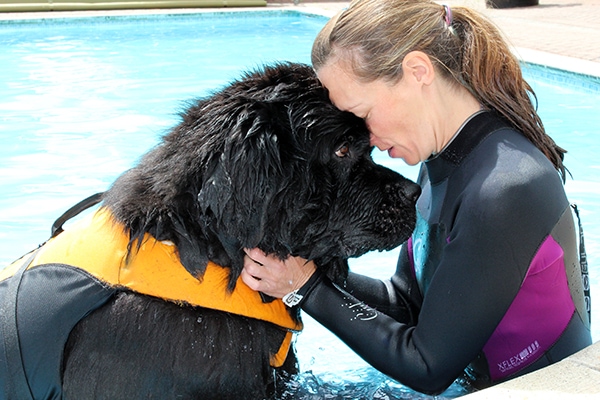 The benefits of Dylan’s hydrotherapy are that he seemed more stable whilst walking due to the increased muscle tone and strength in his joints. His range of movement has increased and therefore he is less stiff and less painful.

He is mentally stimulated whilst swimming, receives safe and controlled exercise to prevent further injury.

His heart and lung fitness is brilliant whilst helping to keep his waistline in check.