Labradors are known for their love of the water and this is true for gorgeous Jack, but this water baby unfortunately found himself in hot water one day whilst enjoying his usual splash. 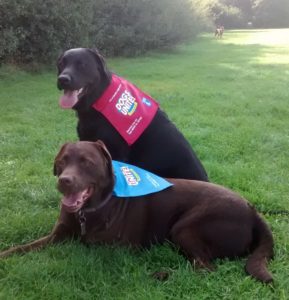 Jack and his brother Harry

Jack has a lot of energy so after an afternoon of agility and high energy fly-ball; there was no better way to cool off than a splash in the nearby ford. Whilst swimming Jack cut his leg and so the swim was cut short and his worried owners brought him straight up to see the Brentknoll team, where his wound was cleaned, stitched up and dressed.

After a few days it was clear that poor Jack wasn't responding to the antibiotics and surgery was required to remove some of the infected tissue. His owners brought him in for frequent dressing changes and check ups but the leg showed no signs of healing.

Despite everyone's best effort, the circulation to Jack's paw was compromised and it was slowly dying.  The use of a prosthetic was explored, but sadly this option wasn't suitable for Jack, so the decision was made to remove his leg. 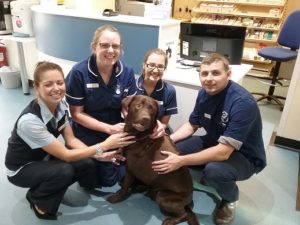 Kate, Sarah, Naomi and Carl are some of the team who operated on Jack, here is is saying thank you for looking after him at a recent visit.

It's now been several weeks since had his surgery and he is making wonderful progress and his wounds are healing nicely. Jack is learning to balance his weight, and is building up his strength in his remaining leg so that he can keep us with his brother Harry.

Jack's owners were devastated that something as simple as playing in a pond, could result in him losing a leg (especially when they have playing in there for years without a problem); but were so grateful to all the staff that cared for him since the accident.

"It's been a real team effort and I cannot thank everyone enough. The vets who carried out surgeries and dressings, the nurses who helped look after him whether he was an inpatient or in for dressings and all the support staff who have given him treats and belly rubs."      Jack's mum

This wonderful boy certainly isn't feeling sorry for himself and is loving life even with only three legs. His tail still wags when he comes in for check ups with the Vets/Nurses and he even rolls over for tummy rubs with the Client Care team in reception (he's even learnt where the girls keep the treats!)

His new look is even helping his charity work, as Jack and his human mum are volunteers for Hounds for Heroes. Jack spends much of this time at local events raising awareness and raising funds for the organisation who provide specially trained assistance dogs to injured and disabled men and women of both the UK Armed Forces and Emergency Services

Learn more about Hounds for Heroes