We are open, click here for our COVID guidelines.

Marilyn is a 3 month old Newfoundland puppy, who like her namesake suffered from heartbreak; only this time our vets were able to fix her broken heart.

Marilyn came to see Dave Fisher as a cardiac referral, after her usual vets found an abnormality with her heart and she was diagnosed with Patent Ductus Arteriosus (PDA).

What Does That Mean?

An unborn puppy relies on it's mother for many things, even important functions like breathing, which means organs like the lungs aren't required at this time; Instead, the mother's body takes care of these functions via the placenta that they share. Before they are born, puppies bodies have a system of shunting (pushing/pulling) blood through vessels so that these 'un-needed' organs don't have to work during this period. This vessel is called the ductus arteriosus and it causes blood to bypass the lungs.

When the puppy is born, it needs to breathe for itself and can no longer rely on it's mother's body. In a normal puppy, the vessel closes shortly after birth as a reaction to the puppy breathing for itself. After birth pressure in the heart changes, causing the blood to flow in the opposite direction and the faulty vessel causes an increased amount of blood flow to the lungs. This dangerous as it can cause fluid to build up in the lungs, resulting in panting and labored breathing.

The continuous flow of blood into the pulmonary artery causes a heart murmur, increased blood flow to the lungs, and increased blood returning to the left side of the heart. Too much blood causes an 'overload' and damage to the major valves in the heart; if not caught in time these valves stop working which will lead to heart failure.

How We Fixed It

Marilyn was lucky and her condition was caught early enough to be treated. Brentknoll Vets Dave Fisher and Carl Thompson performed corrective surgery on her heart to resolve the PDA. 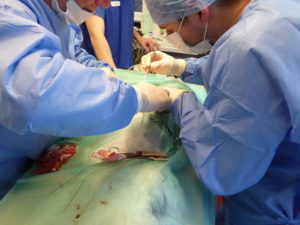 The surgery involved manually closing the faulty vessel, which is a high risk procedure due to the large volume of blood that pumps through the main artery. If the vessel were to tear whilst Dave and Carl were closing it, Marilyn could be at risk of severe blood loss and be in real danger; Thankfully surgery went well and there were no complications.

The Future for Marilyn 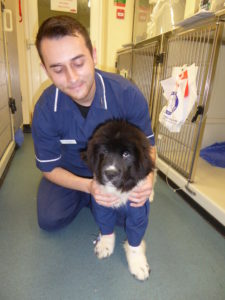 Vet Nurse Matt Morely with Marilyn after her PDA surgery

Post surgery Marilyn was a brave little girl and the staff fell in love with this cuddly pup. Dave Fisher was happy that her surgery had been successful, and been just at the right time as her pre-operative heart scan showed early signs of heart failure. Marilyn is now at home and her wound is healing nicely (with some help from a fetching T-shirt) and the Vets are happy that she is well on the way to recovery.

Thanks to this surgery, Marilyn should have many happy years ahead of her. 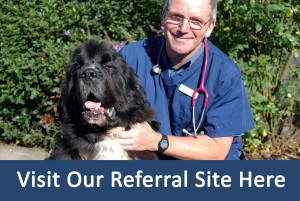 Brentknoll Vets offer Cardiology referrals in Worcester, if your pet has a heart problem, speak to your vet about arranging a referral.

Marilyn the Newfoundland has her broken heart mended at Brentknoll Veterinary Centre, Worcester