All about Acupuncture at Brentknoll Vets

If you are interested in alternative therapies, you may have heard about the benefits of Acupuncture for humans; but did you know it has health benefits for animals too!

Visiting Vet Maria Isabel Fuentes Beneytez (or Bel as she likes to be called) is here with us for the Summer months and she's been introducing us to the benefits of animal acupuncture. Bel has a particular interest in acupuncture and has trained in the technique during her time as a veterinary surgeon.

So what is Acupuncture?

Percy with needles in place, look close to see the one on his head.

Acupuncture involves inserting very fine needles into specific points on the body, with the aim of altering body functions. Acupuncture is actually one of the oldest forms of veterinary medicine in the world and has long been used in China to treat a range of animals, although it is only recently being used in Western countries.

There are now alternatives to using needles, including laser, electrostimulatorion, acupressure, moxibustion (heat), aquapuncture and gold bead implants may be used to stimulate acupuncture points.

Percy is 12 year old Springer Spaniel, usually a highly energetic breed and known for their happy, outgoing personalities. As he has gotten older, Percy has started to struggle with pain and intermittant lameness, caused by Arthritis and weakness in his back legs. 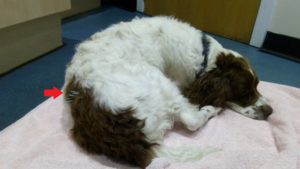 Percy during his first visit, with needles in position along his back.

The vets had tried a range of anti-inflammatory and pain medication, which would help his pain initially; but the effect would to wear off and he was left feeling sore again.

Bel recommended Acupuncture, a first for us here at Brentknoll Vets, but we were all keen to see what affect the treatment would have on Percy's mobility and pain. 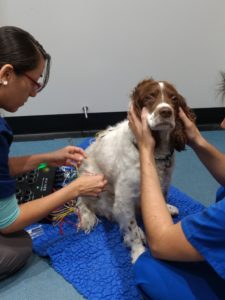 During his first acupuncture appointment with Bel, she inserted the needles one by one and Percy didn't even seem to notice them going in. He was such a good boy, lying on his fluffy bedding during the treatment and he was so relaxed that he even fell asleep at one point.

A week later Percy returned for a second treatment, this time Bel tried the electrically stimulated method as he had been so good during his first visit. Once again, Percy was relaxed and seemed to enjoy the experience.

Percy has now had several treatment sessions with Bel, and his owners have reported a significant improvement in his mobility and pain levels. 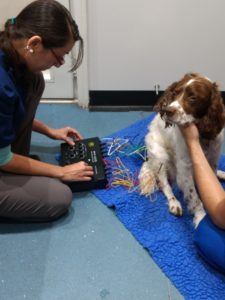 Percy took the treatment in his stride

Percy is still on some pain killers and anti-inflammatory medication, but the aim is to keep him from needing more to manage his Arthritis.