During the 2014 summer season Jack, a Turkish beach dog, had been shot and left for dead. He was also beaten with sticks and had stones thrown at him.  As a result of this appalling cruelty Jack suffered major trauma to the right side of his face and jaw.  His jaw was locked and he was forced to suck nourishment and water through the smallest of gaps. His whole body was tense and hunched against the pain he was enduring. 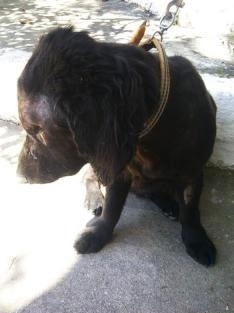 Jack was adopted by his current owner in December 2014. He underwent extensive surgery, showing amazing fortitude and unbelievable bravery.

In February 2015 Jack began a period of recovery and rehabilitation.

Following months of suffering, all of Jack’s joints were out of line, all of the muscles along his body were ‘knotted’, causing restricted movement and undoubtedly pain. His owner was desperate to encourage him to use and exercise his jaw again. Although they suspected Jack would never have full use of his jaw the appropriate exercise was essential to maximise the benefits afforded by his surgery.

Jack was also diagnosed with mild hip dysplasia, which was causing intermittent lameness on the left rear leg – which added to the mis-alignment of his body. His owner felt that his whole body was ‘out of sync’ and needed more help. 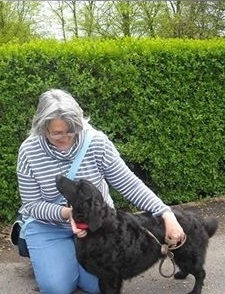 Jack’s owner had previously taken her Flatcoated Retriever to Paula 2 years prior and saw a huge improvement in his mobility, so she got in touch and arranged an appointment for Jack to meet Paula. Over several weeks Paula treated Jack and his body gradually showed signs of becoming more ‘in-line’ which enabled his muscles to relax and work properly, thus improving his movement.

Jack loved the laser treatment, which was performed on his recovering Jaw and body, in fact he often fell asleep during his treatment.

Since first visiting Paula for McTimoney Manipulation, Jack’s movement is greatly improved. He now happily jumps into the car instead of waiting to be lifted up. His movement when walking and running is amazing. The laser treatment to his jaw will need to be continued for a while longer but his owners still continue to see improvements with ongoint treatment.